The Postmodern Condition: A Report on Knowledge - 1979 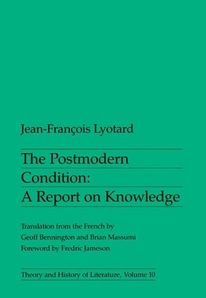 Acclaimed for his innovative investigation of postmodernity, Jean François Lyotard's well-referenced tome, The Postmodern Condition: A Report on Knowledge (1979) was initially commissioned by Conseil des Universités (Quebec) as an investigation into how society should re-evaluate our acquisition of knowledge in a digital/computerised age. However, what eventually transpired was a critically engaging book that, as well as performing its intended task, became an important text on social theory that academics still engage with today.

In an attempt to construe a summary of the 'postmodern condition', Lyotard states in the introduction that: "Simplifying to the extreme, I define the postmodern as incredulity toward metanarratives." (1984: p.xxiv) - a reaffirmation of what theorists before him had implied, but one which very accurately conveys Lyotard's view that postmodernism was a cultural movement established by the disintegration and detachment from previously held grand-narratives (or Metanarratives) found in cultural, religious, political and societal structures. In 1993 Madan Sarup summarized Lyotard's theories by stating that "Lyotard believes that we can no longer talk about a totalizing idea of reason for there is no reason, only reasons". It would be false to imply that Lyotard entirely dismisses narratives, but, like theorists before and after him, rejects those grand-narratives that inefficiently dominate societies – Lyotard uses the term ‘petit récit’(Lyotard, 1984, p.60) that translates as ‘little narratives’. For readers of postmodern fiction, this is reflected by fragmented or disjointed text, one which we see explicitly in John Barth’s 'Lost in the Funhouse'. Barth demonstrates a blatant disregard for his omniscient narrator, his ‘grand narrator’. Lyotard proposes that the 'alternative' to this society is scientific development, one way in which we can globally disparage (or deconstruct) previously-held beliefs about grand-narratives which underpin our society.

When one is faced with evidence that science triumphs over religion or totalitarian politics and laws, then all societies that are founded on those precarious narratives are no longer a legitimate basis for rule, manipulation or threat. As stated above, for Lyotard, postmodernity represents the relinquishment of long-held beliefs and preconceived ideals though he does not omit to tackle what he calls the problem of "legitimisation" (1984: p.27) of the scientific authority; if we dismiss the narratives of our history, only accepting what can be deconstructed and proved through science, then whom legitimizes what is for the greater good? Lyotard addresses this from the start by reflecting that “In the computer age, the question of knowledge is now more than ever a question of Government” (1984, p, 9). In his preface, Lyotard states outright that “Postmodern knowledge is not simply a tool of the authorities; it refines our sensitivity to differences and reinforces our ability to tolerate the incommensurable. Its principle is not the expert's homology, but the inventor's paralogy" (1984: p.xxv). -  Simply, Lyotard is proposing the alternative rhetoric which we use to relinquish the grand-narratives. This theory was mirrored in the views of other theorists, including Jacques Derrida who not only called for an abandonment of grand-narratives, like Lyotard, but declared that society, made up only of signifiers, was itself unstable and easily susceptible to change (Derrida, 1997 p.44).

How is Lyotard's report relevant in 2015?
In contemporary society, one cannot fail to see that religion no longer holds an authority in society at the scale which it once did and, if anything, technological advancement has possibly become the largest narrative of all. Ongoing technological advancements (weaponry, government spies, computer hacking etc.) now dominate and control other states in place of any fear of divine justice. Governments are able to access our very private lives, intercept our exchanges and allows us to be advertised at constantly; as Lyotard predicted, the world in which we now anxiously inhabit is ruled by technological advancement - the internet our culture, capitalism our religion and gadgets our idols