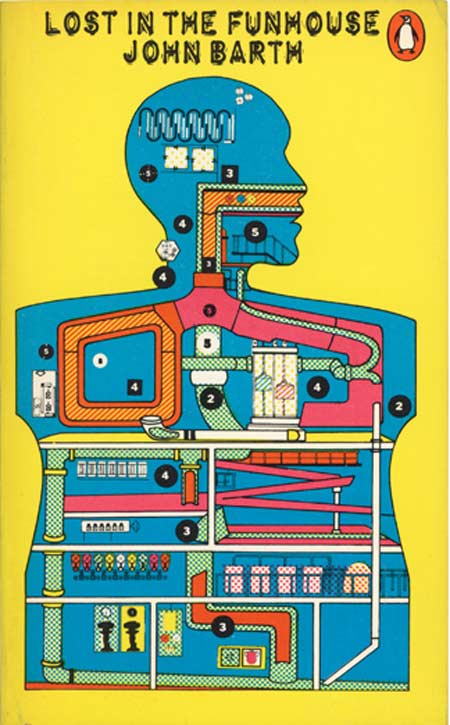 "He wishes he had never entered the funhouse. But he has. Then he wishes he were dead. But he’s not. Therefore he will construct funhouses for others and be their secret operator” (p.97)

Within the Lyotard section of this website, I noted a key quote from his text, The Postmodern Condition: A Report on Knowledge'; “Simplifying to the extreme, I define the postmodern as incredulity toward metanarratives”. Though Lyotard was writing this text almost twenty years after to Barth’s would-be simple story was published, applying his sentiments to ‘Lost in the Funhouse’ aids an auspicious reading - the godlike figure of the omniscient narrator proves himself to be malleable and, considering the ease which he abandons the narrative, unreliable in the extreme. Looking at Barth’s story in this light certainly mirrors a growing postmodern feeling, societies pre-existing metanarratives have proved to be just the same as Barth’s narrator, malleable and unreliable. Very early on in the story, the narration is interrupted, the author shattering what appears to be realism in order to convey to the reader the process of writing and the literary and linguistic conventions that are associated with such a text. After offering the reader a small portion of the story the author writes;

“…Initials, blanks, or both were often substituted for proper names in nineteenth century fiction to enhance the illusion of reality. It is as if the author felt it necessary to delete the names for reasons of tact or legal liability. Interestingly, as with other aspects of realism, it is an illusion that is being enhanced, by purely artificial means” (Barth, 1988, p.73).

Across this website we have looked at only some of the key elements of postmodernism literature, some fleetingly and some more in-depth, that have been made possible through the analysis of John Barth’s ‘Lost in the Funhouse’. Through his relatively short text, Barth conveys a much broader contextual audit of postmodernism – he gives the reader an opportunity to explore metanarratives, metafiction, the authors function, emerging forms of fiction and the art of writing fiction. Popular opinion is that Barth opposes realism yet is ‘Lost in the Funhouse’ not a realer version of realism? The reader is certainly given a much more realistic view of writing a fictional story and though it is an unfamiliar form of realism, I would argue that it should be classed a ‘real Realist’ text.  Using metaphor to convey a bigger picture (not an unfamiliar device in realist fiction) the funhouse becomes a symbol of, not only Ambrose’s sexual frustration, but Barth’s frustration at the contemporaneous state of fiction. There are many other features of Barths fiction that I could have analysed but for me, I wanted to explore Barths attitude to postmodernism and the ways that he sought to demonstrate his ideas. The story starts with a question, “For whom is the funhouse fun?”(Barth, 1988, p.72) offering the answer “Perhaps for lovers.” (1988 p.72). Thus, if we take Ambrose’s sexual frustration to be mirrored by Barth’s artistic convention, then the lovers - those who are free - could be said to be the traditional novelists for whom the funhouse is somewhere to play without reflection.