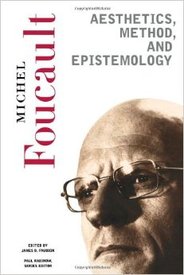 Michel Foucault’s 1969 essay, ‘What is an Author?’ undertakes an investigation into the relationship between the author and his/her text.  He begins his work with a proposal - “I want to deal solely with the relationship between text and author and with the manner in which the text points to this figure that, at least in appearance, is outside it and antecedes it.” (Foucault, 1998, p.205).

So, according to Foucault, what is an author? One way in which the reader can attempt to understand Foucault’s interpretation is considering his use of the term “author function” (1998, p.211) which he describes as “characteristic of the mode of existence, circulation, and functioning of certain discourses within a society.” (1998, p.211). Thus, Foucault’s definition of the author function suggests that the author is directly correlative of his/her discursive context – using Foucault’s own essay to demonstrate this point proves just as fruitful as any other and, perhaps, even more so due to its advantageous references to other authors contemporaneous criticism. Specifically, in the opening sections of his paper, Foucault refers to a question famously posed by Samuel Beckett, “what does it matter who is speaking,” (1998, p. 205) and Foucault implies that the “indifference” of the question indicates that an identity of the author does not rely on the characterization of the author but, “a kind of immanent rule, taken up over and over again, never fully applied, not designating writing as something completed, but dominating it as a practice.” (Foucault, 1998 p.206).

#2 – “in mathematics reference to the author is barely anything any longer but a manner of naming theorems or sets of propositions” (1998, p.213) –
Foucault then, interestingly, considers how texts are received within differing disciplinary discourses, and regards those papers authored by the scientific academics as only written to serve a purpose – this could be seen as an act which Foucault discussed in his earlier point. He further discusses how, within the literary discipline, the author MUST be present and palpable.

#3 – “the result of a complex operation that constructs a certain being of reason that we call "author." (1998, p.213) –
Thirdly, Foucault identifies that the author function must be a rational construct and not just the application of the discourse to an individual. It is this which allows readers to understand a text in terms of context if we are already familiar with the author and often, the discourse. This is how we measure a text as authentic or not.

#4 – Finally, Foucault states that the author is a “source of expression” (1998, p.215) that can be equally constructed through differing mediums of literary format.